At these volatility levels, our nominal strategy positioning will likely still be materially underweight equity into May. Across our strategies, volatility has to return to the neighborhood of 20% before our model allocations will be targeting “neutral” equity exposure (e.g. 60% for Dynamic Managed Volatility, 80% for Managed Volatility Equity). Given the truly massive Federal monetary and fiscal intervention in the market, we will continue to carry options-based long equity proxies across strategies to at least partially participate in any short-term market gains, however unwarranted they may be.

For example, we are carrying 4% notional coverage in VIX puts, spread across two strikes and expiries. These were purchased as one such long equity proxy, when the VIX was near its recent peak. Our strategies are also carrying May expiry S&P 500 call spreads, 2300-2455 strike, 10% notional. We anticipate replacing this option exposure with linear exposure as volatility subsides.

One final point regarding portfolio diversification; both investment grade and high yield spreads are at, or near, record one-month volatility and three-month correlation with the S&P 500. Even with the Fed stepping into the market with outright purchases of wide swaths of the investment grade universe, we still expect these metrics to remain elevated until the full economic impact of the coronavirus is understood. In the interim, corporate fixed income may not provide as much portfolio diversification as intended, given the current extreme correlation with equity, and general spread volatility. Rather than rely on fixed income as a risk diversifier, we continue to view risk management embedded in the equity portion of investors’ portfolios as the appropriate choice.

The abbreviated week of April 6th – April 9th saw the volatility of equity indexes begin to contract from the staggering highs seen over the prior two weeks. Monday’s (April 6th) massive +7.03% move forced one-month realized volatility to come in at 96.8%, which is the 11th highest value in the 92-year S&P 500 history. However, the remainder of this week saw relatively muted index moves, with returns of -0.16%, +3.41%, and +1.45% for the subsequent three days.

Assuming more subdued market moves going forward, we can see one-month realized volatility close this week (April 17th) around 60%, close next week (April 24th) around 40%, and close the following week (May 1st) around 30%. Again, these levels are predicated on the assumption of modest market moves in the interim.

We still question whether or not the market has fully discounted the economic impact of the coronavirus. For instance, U.S. Continuing Jobless Claims rose from 2.5M to 6.6M over the period 06/29/2007 – 05/29/2009, an increase of 4.1M over the entire Great Financial Crisis. This same metric increased from 1.7M to 7.5M in two weeks, as-of 03/27/2020. There is no modern parallel for what is currently happening to the U.S. economy, and so we do expect some outsized daily returns as earnings season unfolds

The opinions expressed herein represent the current, good faith views of the authors at the time of publication and are provided for limited purposes, are not definitive investment advice, and should not be relied on as such. The information presented in this article has been developed internally and/or obtained from sources believed to be reliable; however, Securian AM does not guarantee the accuracy, adequacy or completeness of such information. Predictions, opinions, and other information contained in this article are subject to change continually and without notice of any kind and may no longer be true after the date indicated. Any forward-looking statements speak only as of the date they are made, and Securian AM assumes no duty to and does not undertake to update forward-looking statements. Forward-looking statements are subject to numerous assumptions, risks and uncertainties, which change over time. Actual results could differ materially from those anticipated.

For Institutional Investment Use Only.

All sources are Bloomberg and Securian Asset Management, Inc.

Securian AM Market Volatility update May 11, 2020 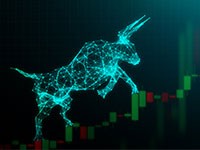