The Economy and the Markets | Fourth quarter 2016

The election of Donald Trump as president of the U.S. was by far the biggest political and economic event of the fourth quarter.

The Economy and the Markets | Fourth quarter 2016

His campaign platform was based on pro-growth, lower taxes, tougher trade and immigration policies, and a more combative national security platform. What happens in the economy and markets as a result of his term in office may certainly mean more change than investors have been used to.

The election results have led to a new outlook for the economy and the markets. The rally in markets and expectations for growth may be based on renewed optimism that business investing will now be fruitful again. We’ve seen stocks rally, especially in cyclical industries since the election, while defensive stocks lagged, as expectations for higher growth, inflation and interest rates rise.

So far, Trump has been true to his campaign promises. He’s nominated and appointed businessmen focused on changing the political status quo. As Trump takes office, we might expect to see the impact of regulatory changes first with cabinet and agency appointments who are likely to take a different approach to enforcing current laws and regulations. Tax cuts are likely next with a Republican majority in Congress. Infrastructure investments will likely take longer to emerge.

Apart from the renewed optimism surrounding Trump, economic data had already been improving after what was a very weak first half in 2016. Both consumer and business optimism is high. Third quarter GDP growth came in at 3.5 percent, and expectations for fourth quarter are between 2.5 - 2.9 percent. Capitalism is a confidence game, and confidence is rising in the U.S.

While the recent stock rally was due in part to expectations of policy reform and stimulus, prospects for earnings growth also play a part. The earnings recession ended in the third quarter with profits rising for the first time in five quarters by 3 percent. The forecast for next year’s earnings continues to be positive. In fact, earnings expectations have almost doubled post-election.

The market is checking all the boxes in the traditional recovery playbook: rates up, stocks up, bond yield spreads tighter and business displaying a growth mindset. In contrast, prior to the election, any hint of a rate increase drove stocks down, reflecting that lower interest rates were needed to drive growth. Now growth is driving interest rates and investors believe business is back in the driver’s seat.

Long term interest rates rose by 85 basis points, which was the biggest rise since the Taper Tantrum in 2013. The change was fairly abrupt, leading to a steeper yield curve. Risk appetite remains strong though and corporate credit remains in demand. The yield differential between U.S. and foreign bonds should keep international demand for U.S. securities high as the European Central Bank and Bank of Japan continue holding their short term rates at or below zero.

The Federal Reserve (Fed) raised rates in December, the only time in 2016 despite projecting four increases at the beginning of the year. The Fed is now projecting three rate increases in 2017. Signs of inflation, although still weak by historical standards, are building and could reach the Fed’s target of 2 percent in 2017. With unemployment already below 5 percent and likely headed lower on stronger growth expectations, wage pressures should build.

Cyclical stocks, financials and energy were very strong in the fourth quarter. The out of favor sectors in 2015 and early 2016 have turned into favor now, led by expectations for an improving economy and rising oil prices.

Real estate stocks lagged in the quarter. Rising rates and higher inflation expectations drove investors to shun dividend stocks like REITs and utilities, favoring better growth opportunities. With REIT earnings already growing at a slower pace, this was a double whammy for REITs. However, if U.S. growth materializes as markets are expecting, real estate earnings could reaccelerate and lead to a rise in REIT earnings. Right now though, the headwinds in real estate are stronger than the tailwinds.

Away from public REIT stocks, private market valuations are still holding strong. Fundamentals for commercial real estate are still in a growth pattern, with careful building (limited oversupply) and steady employment growth providing a solid foundation for the private and public markets. The presence of foreign investors continues to have a big influence in U.S. markets. Top markets for investor demand include the east and west coasts, particularly hotels and apartments.

Trump has said little about homebuilding, but the U.S. has been underinvesting in single family housing in the post crisis era. In the event a Trump Administration does promote housing, it could lead to even higher GDP growth, near 3 percent, as the housing multiplier effects are widespread.

We expect inflation to start pushing toward 2 percent. Wage pressure is slowly building with average hourly earnings rising from 1.8 percent to 2.5 percent in the last 6 years and the passage of higher minimum wage laws in several major cities and states. Today’s low unemployment rate and demand for skilled workers will likely support continued wage growth. The protectionist rhetoric of the President-elect could influence import costs through tariffs, domestic industry protections and the immigrant labor supply – all leading to positive pressure on inflation.

2016 was generally a good year for stocks with indices finishing near all-time highs. Once the new administration takes office, change will need to be quick and substantive in order to not disappoint markets. But risks remain. Traditional Republicans could push back on stimulus, and Trump’s unconventional approach may provoke party infighting. Campaign proposals on spending between Trump and Republicans were trillions of dollars apart, and new deficit spending may be difficult to pass. A tough stance against trading partners could not only upset long standing trade patterns but also exacerbate the U.S. dollar’s rise and hurt export firms. Politics will be in the forefront of investors’ minds in 2017 as results of the new administration policies unfold.

The Dow Jones Industrial Average is a stock market index that shows the price-weighted average of 30 large and well-known U.S. companies.

The S&P 500 Index consists of 500 large cap common stocks which together represent approximately 80% of the total U.S. stock market. It is a float- adjusted market-weighted index (stock price times float-adjusted shares outstanding), with each stock affecting the index in proportion to its market value.

Please note one cannot invest directly in an index. Past performance is not guarantee of future results.

will include currency fluctuations, political, social and economic instability and differences in accounting standards when investing in foreign markets. Fixed income securities are subject to credit and interest rate risk and, as such, values generally will fall as interest rates rise.

Investments will fluctuate and when redeemed may be worth more or less than originally invested. Past performance is not indicative of future results. Nothing contained herein constitutes investment, legal, tax or other advice nor is it to be relied on in making an investment or other decision. This commentary should not be viewed as a current or past recommendation or a solicitation of an offer to buy or sell any securities or to adopt any investment strategy. Opinions expressed herein are those of Advantus only. Investors should keep in mind that markets are volatile and unpredictable.

Approved For Use with the General Public.
91067 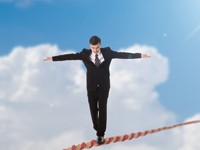